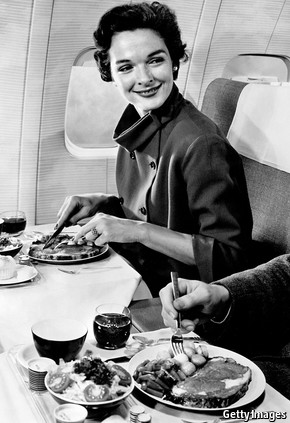 Back in the days when we had elbow-room

TWO economy-class passengers recently caused a ruckus on a flight between Miami and Paris, after one annexed the sliver of territory they shared by reclining his seat. It was one of three such incidents within a fortnight which led to planes being diverted.Nowadays those at the cheap end of the plane barely have room to open their copies of Thomas Piketty’s recent book lamenting a new age of inequality. Yet airlines think there is further scope for cramming more bodies into economy, and that passengers, for all their moans, will tolerate this in exchange for cheap fares. Meanwhile, business class keeps on getting comfier.Some economy-class seats have already lost about 30% of their weight in the past 10 to 20 years, says René Dankwerth of RECARO, a seat-maker. But there is scope to do more: padding is being made thinner by replacing foam with netting; reclining mechanisms are being removed from some short-haul planes. Most of the extra room thus created is used to squeeze in extra rows of seats.Skift, a research firm, notes that this has prompted a seating war among the planemakers. First,…