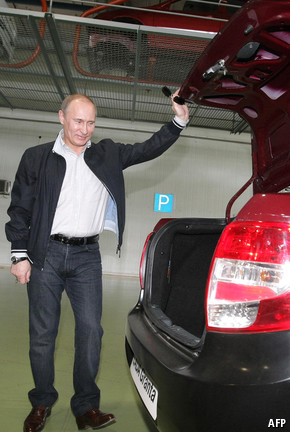 My other car is not a Lada

BEFORE the current standoff between the Kremlin and the West over Ukraine, it was already clear that Russia’s economic model, of strong energy exports fuelling domestic consumption, was running out of steam. In 2007, on the eve of the global financial crisis, Russia’s economy grew by 8.5%. Last year growth was a meagre 1.3%.Still, the country’s population of 144m, its entry into the World Trade Organisation, its consumers’ aspiration to a Western lifestyle and its status as the “R” in the BRICs have persuaded multinationals to keep investing in plants in Russia, and foreign investors to keep providing capital to Russian firms. The attitude until recently, says Alexis Rodzianko of the American Chamber of Commerce in Moscow, was that “Russia’s economy may be slowing, but my own prospects are pretty good.”Now the outlook for businesses there is looking gloomier. With pro-Russian separatists seizing government buildings in eastern Ukraine, amid talk of a full-scale invasion, firms of all kinds fear a tightening of American-led sanctions, a cut-off of foreign lending and…