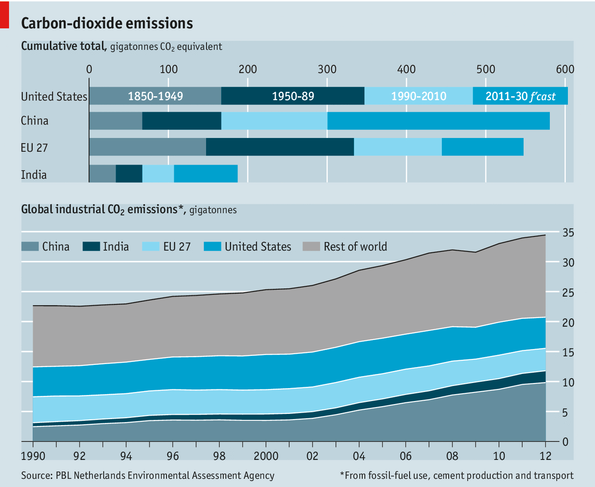 Industrial emissions of carbon dioxide continued to rise in 2012, pushing the atmospheric level ever higher, but they did so at a lower rate than in many recent years. Indeed in big developed economies they dropped—by 4% in America, where utilities were switching from coal to gas, and by 1.3% in recession-hit Europe.What happens in rich countries, though, matters much less than it did. Developing economies now account for over half the world’s emissions, and their share will keep rising. In China, they rose less quickly last year—just 3%, rather than the 10% that has been the recent norm—and the amount of carbon emitted per unit of GDP is falling quite fast. Other nations are not making such progress. India emits much less carbon dioxide than China; but it is a bigger source than Russia, and last year its emissions rose by 7%. Soon more than half of all the carbon ever emitted by human industry and land use will have come from developing countries.