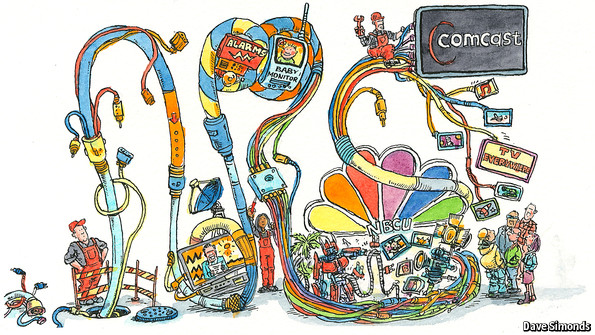 WHEN Comcast, America’s largest cable operator, took a stake in NBCUniversal (NBCU) in 2009, “30 Rock”, a popular NBCU comedy, wove the deal into its plot. The programme’s characters came under the thumb of a new corporate parent, “Kabletown”, which introduced innovations like moving customer services to a part of India with no phones in order to “provide the same level of service at zero cost”. Comcast employees can take a joke. Last month, at a gathering to celebrate Comcast’s 50th anniversary, they showed a clip of the show, to the amusement of the firm’s real employees.A sense of humour is a sign of confidence. Thanks to the $28 billion it spent to acquire NBCU, Comcast is the world’s largest media firm, with a market capitalisation of around $128 billion. NBCU gave Comcast control of a range of new “content”, including broadcast and cable networks, a Hollywood studio and a theme-park business. Comcast is also America’s most powerful media business, because it controls what people watch and the pipes that deliver it. In its efforts to retain that position it is having to adapt to the new ways that people want to watch TV and consume entertainment that smaller…