Home  »  Business   »   East German industry: Still not over the wall 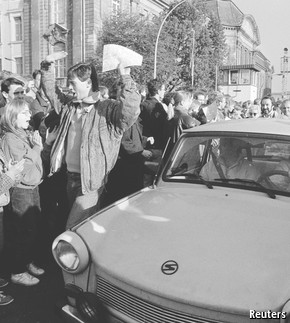 GEOGRAPHIC balance is, relatively speaking, a strength of German business. Whereas London and Paris dominate in Britain and France, Germany’s great companies are spread across the country, north, south and west. But not so much east. Twenty-five years after the Berlin Wall fell on November 9th 1989, eastern Germany has closed much of the macroeconomic gulf that once separated it from the west. Gross domestic product per inhabitant has grown from 33% of the western average in 1991 to 67% in 2013. But entrepreneurship is still finding its feet in the “new states”, as they are officially referred to.East Germany’s legendary, clunky little car, the Trabant (pictured), has long ceased production, but West German carmakers have built factories in the eastern states of Saxony and Thuringia. Many eastern businesses were taken over by western ones after the wall fell. But just as no eastern football club plays in the elite Bundesliga, none of Germany’s biggest 30 listed companies, which make up the DAX stock index, is based in the east. Headquarters matter. The people at a company’s heart are its biggest brains and highest earners. Headquarters also attract…