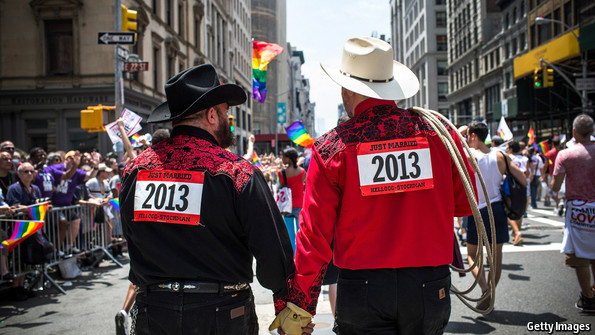 SPEAKING at Lithuania’s gay-pride parade last year, Birgitta Ohlsson was pelted with eggs. Even so, the mood was much better than at the inaugural event three years earlier, says Ms Ohlsson, who is Sweden’s Minister for European Union Affairs and a prominent advocate for gay rights. This time round cheering supporters outshouted the hundreds of protesters, and the number of marchers had doubled, to roughly 1,000.Nearly 500 gay-pride events took place in 2012 and the total for 2013, when tallied, is sure to be greater, according to InterPride, a network of groups that run them. Nine out of ten were in Europe or North America. They included seminars, films and parties, with a gay-pride march as the centrepiece of most. The way the march looks—and whether one is allowed at all—is a barometer of gay rights in a country, says Evelyne Paradis of the International Lesbian, Gay, Bisexual, Trans and Intersex Association (ILGA), an umbrella group.The first pride marches, in America four decades ago, were protests against police violence and harassment. Today’s vary from solemn rallies calling for acceptance and equality in homophobic places to huge street parties sponsored…