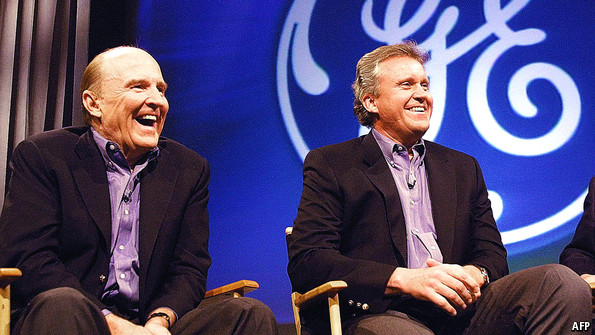 Thanks darling, but I wanted a gas turbine

THINGS at last seem to be going Jeffrey Immelt’s way. On June 23rd General Electric, the huge American multinational he runs, was declared the winner in a battle for the energy businesses of Alstom, a French engineering group. GE snatched Alstom from the jaws of Siemens, its German archrival, which had been encouraged by the French government to make an alternative offer, and which had enlisted the help of another of GE’s main competitors, Mitsubishi Heavy Industries of Japan.Mr Immelt’s charm offensive, including meetings with France’s president, François Hollande, and an appearance before the National Assembly, paid off. But to win official blessing he had to agree to a messy deal in which GE will get all of Alstom’s gas-turbines and most of its steam-turbines business but will end up in three joint ventures with Alstom in making wind- and hydropower generators, power-grid equipment and steam turbines for nuclear-power stations. GE also had to agree to sell its rail-signalling business to Alstom. And the meddlesome French government will become a shareholder in Alstom (see…