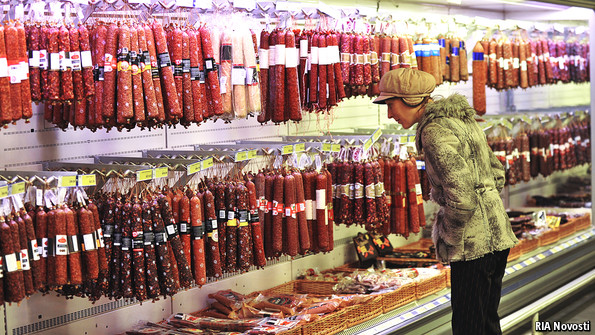 DIPLOMATS wonder if Germany will ever back harsh consequences for Russia over its invasion of Crimea. Second-world-war history weighs on German decision-making. But economics does too. Germany gets about a third of its oil and gas from Russia. It also sends a lot of its exports of manufactured goods there. Germany alone accounts for almost a third of the EU’s total exports to Russia. And Russia is Germany’s 11th-biggest export market, worth €36 billion ($48 billion) last year.The Committee on Eastern European Economic Relations, a lobby group representing big businesses, says that 300,000 German jobs depend on trade with Russia, 6,200 companies with German owners are active in Russia, and German companies have invested €20 billion there. No surprise, then, that the committee’s boss calls sanctions “senseless”.The biggest export industry is cars and motor parts. Daimler, BMW and Volkswagen have all been pushing into Russia: though Germany’s overall exports to the country fell by 5% last year, the motor industry’s sales rose by 22%. VW is the leader, selling more than 200,000 cars there last year. In public, the car-industry bosses are guarded, but it is a fair bet…