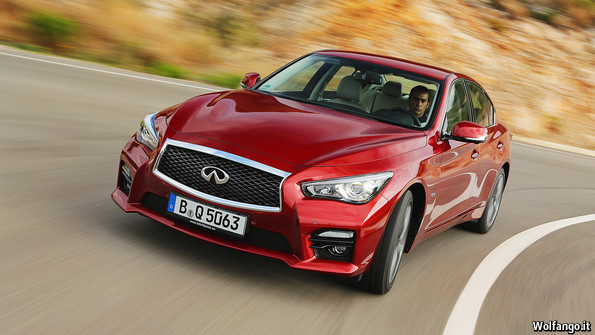 A MONTH before launching Lexus in America in 1989, Toyota considered running a television advertisement showing German aristocrats at a wild party in a hilltop castle. The voice-over intoned that the Teutons had dominated upmarket, high-performance cars for nearly 60 years but they had only “30 days left to enjoy it”.The ad never made it to the TV screens, which is just as well: three German brands, Mercedes, BMW and Volkswagen’s Audi, have become ever more dominant as emerging-markets growth has expanded global demand for premium cars. Lexus, Acura and Infiniti, the upmarket brands dreamed up in the 1980s by Japan’s big three carmakers, Toyota, Honda and Nissan, have been left trailing (see chart). Together the German trio now have 70% of the market for fast, expensive and luxurious cars, whereas the Japanese have just 10%. And they are being overtaken by Jaguar Land Rover (JLR), a British (but Indian-owned) firm, which last year sold almost half a million cars, just behind Lexus.