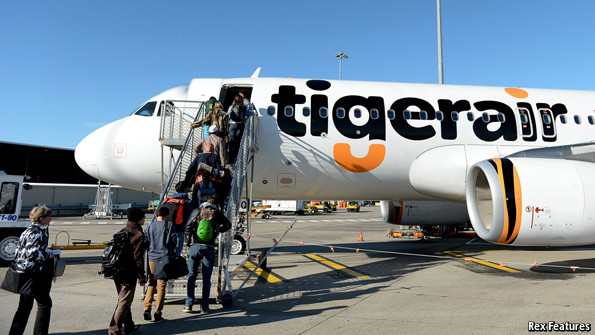 Not doing a roaring trade

SOUTH-EAST ASIA’S low-cost airlines have gone from feast to famine. Cheap, short-haul, no-frills flying came late to the region, but people have taken to it eagerly. In just ten years, according to the Centre for Asia Pacific Aviation (CAPA), a research firm in Sydney, low-cost carriers’ share of the region’s aviation market has soared from almost nothing to 58%. In Europe, where cheap airlines have been flying for much longer, easyJet and its fellows account for only about 40%. Now South-East Asia’s skies are looking crowded.The rise of low-cost carriers reflects pent-up demand for flying in an increasingly well-off part of the world. This year another 12 such airlines may join the 47 already flying in the Asia-Pacific region. This week it was reported that Beijing is planning a new, $14 billion airport. In South-East Asia growth has been particularly strong: many of its 600m people live in large archipelagic countries, such as Indonesia and the Philippines, where flying is the easiest way to get around. Of the world’s 15 busiest low-cost international routes, nine are in South-East Asia. All this demand…