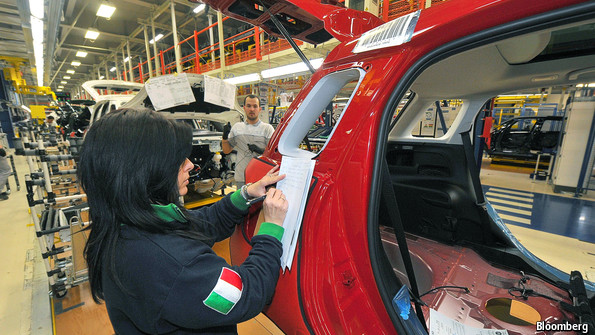 The Serbs are coming

MASS-MARKET carmakers in western Europe are enduring car sales at their lowest since 1993. They are losing money on their assembly plants in their home countries, yet politics makes it hard to close them. That has encouraged them to seek ways of manufacturing more cheaply in emerging-market states on Europe’s periphery, to drive down their average costs.Take Fiat, which lost €247m ($327m) in the third quarter of this year. Some 5,700 workers have been put on extended leave in Italy, and even in Poland Fiat has had to shed 1,450 jobs. But its Serbian operation is expanding, and in just over a year has gone from zero to becoming the country’s largest exporter.Since March, Fiat has taken on 600 new workers and now employs 3,800 at its plant at Kragujevac, a town in central Serbia. Local suppliers to the plant have taken on a further 1,200 recruits. Fiat has invested €1.2 billion in the plant, which now turns out 600 of the company’s chunky, family-friendly 500L small cars each day.The region was so badly hit in the 1990s by the collapse of Yugoslavia, followed by sanctions and war that it became known as hunger valley….