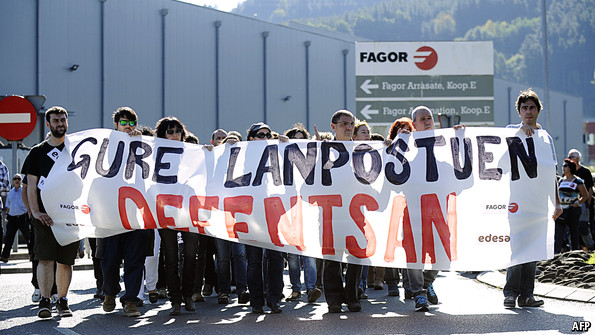 “In defence of our jobs”, but protests won’t save them

NEWS that Spain’s largest appliance-maker is heading for bankruptcy will not come as a complete shock in the crisis-ridden country. Yet Fagor is a special case. It is part of Mondragon, the world’s biggest group of worker-owned co-operatives. Nestled in the green hillsides of the town of the same name, in the Basque country, Mondragon has won many awards and much praise as a shining alternative to shareholder capitalism and a bastion of workplace democracy during its six decades of history.Now, one of the group’s key principles—of solidarity among its 110 constituent co-ops—has found its limit. Fagor has lost money for five years and has run up debts of €850m ($1.2 billion). Its sales have fallen sharply because of Spain’s property bust and low-cost competition from Asia. Even pay cuts of over 20% have not been enough to turn it around. Its factories all ceased production three weeks ago.In the past, losses in one part of the group have been covered by the others, but this time Fagor’s pleas for a €170m lifeline were rejected, even though the Spanish and Basque governments were ready…