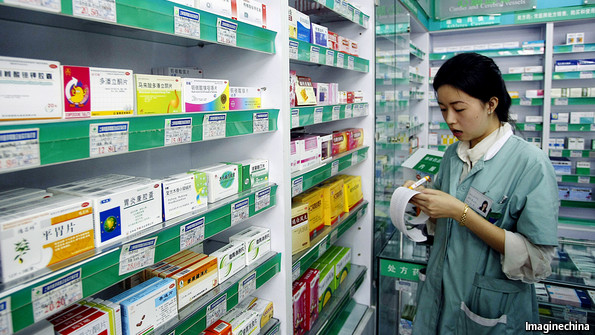 MULTINATIONAL drug companies, now looking forward to a sustained boom in the Chinese market, should instead be bracing themselves for a collapse in profits over the next few years. So concludes a new report by Bain & Company, an American management consultant.China is already the world’s third-biggest market, behind only America and Japan, and is likely to consume $75 billion-worth of medicines this year. Sales have been growing at a compound annual rate of nearly 25% since 2009. Rising incomes and rapid ageing mean that demand for drugs should continue soaring. The expansion of publicly funded health insurance should also, in theory, bolster demand.However, as Bain points out, foreign drugmakers now make most of their profits not from new products still under patent, but from branded medicines whose patents have expired. In America such older drugs have tiny margins because of the fierce competition from makers of unbranded “generic” copies. In China the off-patent medicines are highly profitable, partly because locally made generic versions are of poor quality. Alas for the foreign drugmakers, reforms under way are likely to trigger a slump in sales of their…