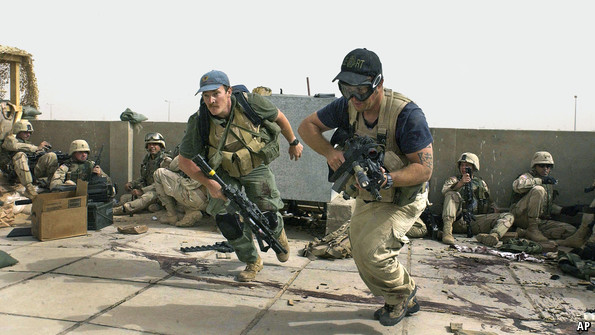 Blackwater, under contract to Uncle Sam in Iraq

“WE WERE selling $1m a year in merchandise with the company logo on it,” says Erik Prince with a mixture of nostalgia and defiance. Blackwater, the company in question, rose to worldwide prominence as an outsourced branch of the American army during the occupation of Iraq and Afghanistan. It had plenty of admirers for the way it had pioneered a new branch of the defence industry, earning a total of around $2 billion from Uncle Sam for providing armed personnel to the Pentagon, the State Department and, secretly, the CIA. But the firm was overwhelmed by its more numerous critics, who said it was an undisciplined, unaccountable bunch of mercenaries.In 2010 Mr Prince gave up the fight. He sold the firm, which he had founded in 1997 and which got its first big break by teaching police to handle school shootings after the 1999 Columbine massacre. It is smaller now and mostly does less controversial work such as guarding diplomats and providing training. Its new name, Academi, could scarcely sound less aggressive.Mr Prince has started talking, after a long silence, to promote his book, “Civilian…