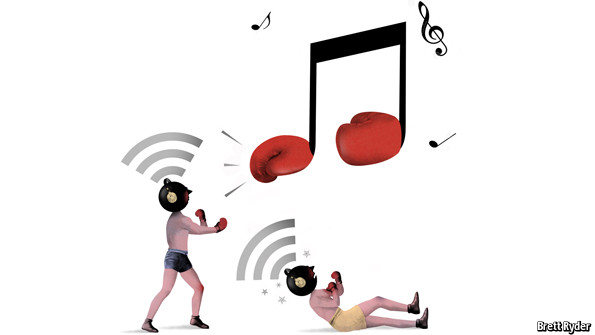 SOON after Napster’s launch 15 years ago, in June 1999, the music-sharing service became America’s most talked-about firm, and one of the fastest-growing companies yet seen. Its teenage founders, Shawn Fanning and Sean Parker, were commissaries of cool. But Napster’s glory was short-lived. Record labels pummelled it with lawsuits, saying that its peer-to-peer file-sharing technology, which made it easy for people to pirate music, was as dangerous and illegal as a punk rocker’s drug habit. In 2001 a court ruled that Napster helped facilitate copyright infringement. The firm later filed for bankruptcy and its brand was sold.Having become the music industry’s Antichrists, Messrs Fanning and Parker have spent the past 15 years trying to rebrand themselves and launch new ventures, with decidedly mixed results. Mr Parker says that having survived the “epic, Greek-tragedy failure” of Napster has endowed them both with “unnatural endurance”. Today he is by far the more famous of the Shawn-Seans, thanks to his eye for business opportunities and stomach for controversy. Mr Parker has made a habit of being bumped out of one company only to pop up in another. Napster’s board…