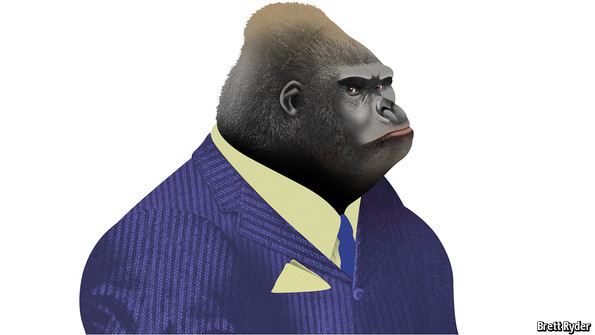 IN GORILLA society, power belongs to silverback males. These splendid creatures have numerous status markers besides their back hair: they are bigger than the rest of their band, strike space-filling postures, produce deeper sounds, thump their chests lustily and, in general, exude an air of physical fitness. Things are not that different in the corporate world. The typical chief executive is more than six feet tall, has a deep voice, a good posture, a touch of grey in his thick, lustrous hair and, for his age, a fit body. Bosses spread themselves out behind their large desks. They stand tall when talking to subordinates. Their conversation is laden with prestige pauses and declarative statements.The big difference between gorillas and humans is, of course, that human society changes rapidly. The past few decades have seen a striking change in the distribution of power—between men and women, the West and the emerging world and geeks and non-geeks. Women run some of America’s largest firms, such as General Motors (Mary Barra) and IBM (Virginia Rometty). More than half of the world’s biggest 2,500 public companies have their headquarters outside the West. Geeks…