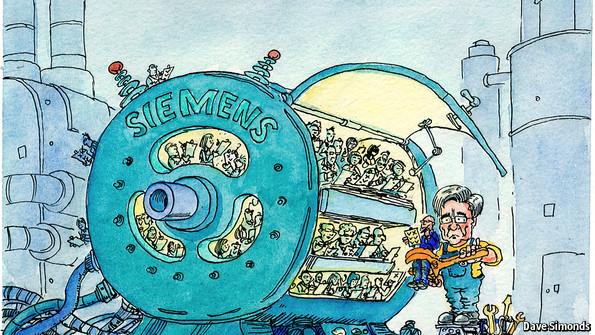 LONG-LIVED companies can change radically over time. Nokia, for example, began in 1865 as a pulp mill; recently it sold its mobile-phone business to Microsoft (see article) and now it mainly makes networking equipment. By contrast, Siemens has been quite consistent. The Economist first wrote about the company in 1868, when it joined a consortium to build a telegraph cable from Britain to Russia and India. In an 1882 article about another tech boom—the spread of electric lighting after the perfecting of the dynamo—we noted that Siemens was hedging its bets by making both alternating- and direct-current ones. To this day, when asked to sum up his firm’s business in a word, Joe Kaeser, its chief executive, says, “electrification”.Mr Kaeser is nonetheless hoping to remake Siemens, at least partly. After electrification, he likes to add two more words: automation and digitisation. The engineering giant is to focus on doing these three things profitably. Businesses that do not fit…