Home  »  Business   »   The film business: Even now, nobody knows anything 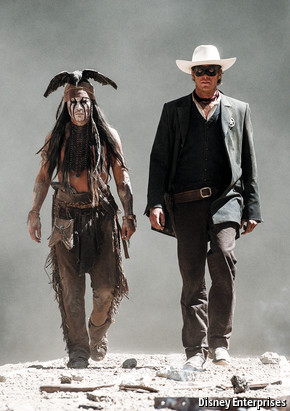 Is that a turkey on your head?

IN 1983, when William Goldman, a star screenwriter, revealed the inner workings of the film-making business in “Adventures in the Screen Trade”, Hollywood was in turmoil. The studios were reeling from a string of flops, most notably “Heaven’s Gate”, a Western released the previous year that had cost $44m (a huge sum in those days), ruining United Artists, the studio that made it. Mr Goldman’s book is best remembered for coining the rule that in his industry, “nobody knows anything”: it is anyone’s guess whether a film will be a hit or a miss.Three decades on, following such big-budget turkeys as “The Lone Ranger” (pictured), the situation in Hollywood is much the same. Only more so. These days the studios assume that to get people into the cinemas, films must be splashier, so production budgets can run in excess of $300m and cost an additional $100m-150m to market. When Disney’s “Johnny Carter”, an adventure flick, bombed last year, the entertainment giant suffered a $160m write-off. Its studio boss, Rich Ross, was told: so long, and let’s do lunch some time.As the studios spend ever more on lavish…