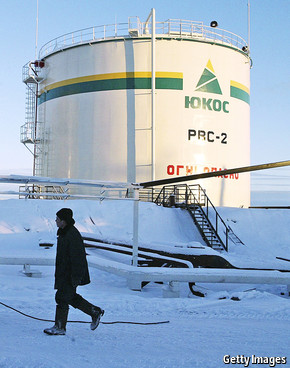 Yukos: seized by the state

JAWS dropped in July when a group of Yukos shareholders won a $50 billion arbitration award—20 times the previous record—against Russia for expropriating the oil company in 2004. The Kremlin had until November 11th to appeal against the ruling, by a tribunal in The Hague, and did indeed do so. It continues to maintain that it was not bound by the energy treaty under which the claim was brought, because it had signed but not ratified it. Though Russia’s chances of getting the ruling reversed seem slim, the appeal process could grind on for 10 years.Even so, GML, a holding company representing Russian shareholders of Yukos (except its founder, Mikhail Khodorkovsky, who gave up his interest in the firm), can start chasing Russia’s assets in other countries by applying to their courts. It plans to start later this month in Britain, America, Germany, France and the Netherlands.The first targets will be “low-hanging fruit”, such as state-owned art and buildings that are not used for strictly diplomatic purposes, says Tim Osborne, GML’s executive director. Embassies, warships and other non-commercial sovereign…