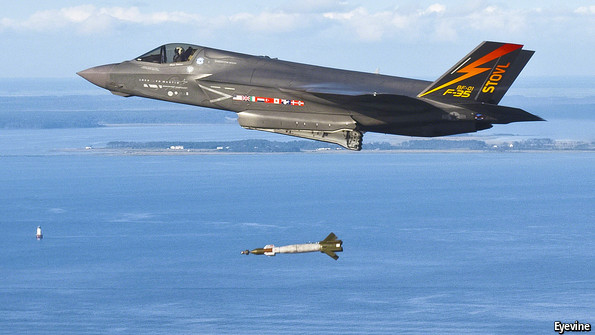 THE star of the show was missing from the skies above the Farnborough air show, Europe’s biggest aerospace get-together, which began on July 14th. The F-35 fighter (pictured), which was to have made its first appearance outside America, is grounded after an engine fire. Not taking to the air when expected is a trait of Lockheed Martin’s jet. It is years behind schedule and stratospherically over budget. Its absence is an embarrassment for Lockheed but, then again, its presence might have reminded the defence officials shopping for kit at Farnborough of just the sort of complex and expensive programme that they want to avoid signing up to in future.Arms-makers are going through a lean period. Some big contracts, such as ones to make bombers, trainer aircraft and drones, are still up for grabs in America, the world’s biggest spender. But it and other rich-world governments, struggling to curb their deficits, are trying ever harder to get the most bang for the fewest bucks. The revenues of 17 of the top 20 American weapons-makers shrank in 2013. American-led wars in Iraq and Afghanistan had helped to push global spending to a record $1.7 trillion in 2008. Since then…