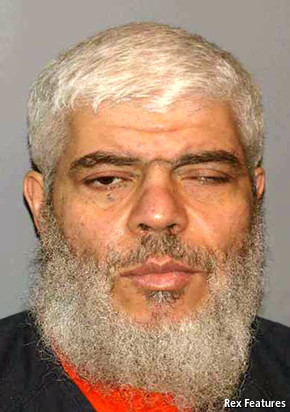 An end to the rabble-rousing

WITH his eye-patch, prosthetic hook-hands, praise of Osama bin Laden and rants against infidels, there was something of the pantomime villain about Abu Hamza. On May 19th the jury in a federal court in Manhattan decided that, beneath the theatrics, the villainy was deadly: Mr Hamza was found guilty of 11 terrorism-related charges. His tortuous case has cast light on justice and attitudes to terrorism on both sides of the Atlantic.Mr Hamza, originally called Mustafa Kamel Mustafa, was born in Egypt but moved to Britain in 1979. He once worked as a nightclub bouncer. In the late 1990s he became infamous as the imam of Finsbury Park mosque in London, preaching photogenically outside during police raids. As authorities in Britain and elsewhere groped for the line between free speech and incitement, and sought to avoid alienating law-abiding Muslims, he remained at liberty despite his bilious views. He helped his adoptive home earn the sobriquet “Londonistan”, conferred for what many saw as indulgence towards Islamic radicals. Even the queen is said to have asked why he hadn’t been collared.Finally, in 2004,…