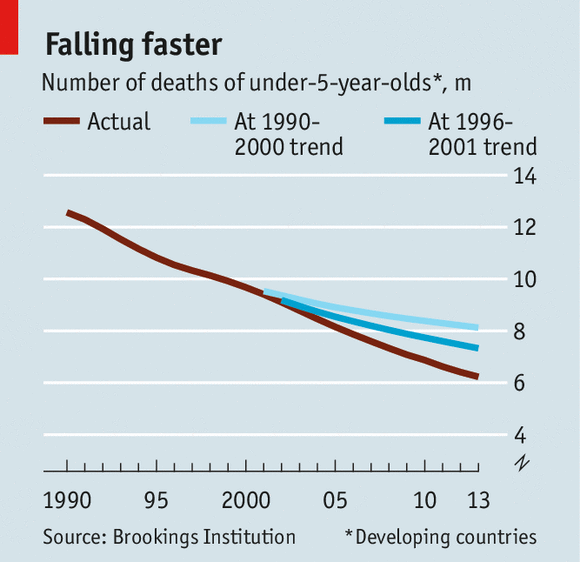 ONE of the happier trends of the first years of this century has been a dramatic fall in infant mortality. In 2013 around 6.3m children under the age of five died around the world, down from 9.7m in 2000. Achieving a two-thirds decline from 1990 mortality rates (when 12.7m children aged five or under died) was one of the UN’s Millennium Development Goals (MDGs), a set of eight development targets for 2015 that were approved at a UN summit in 2000. Working out the extent to which the MDGs were responsible for this decline has become a big part of the debate over whether they were a success and what should replace them when they expire next year.The main difficulty is to guess what would have happened had the MDGs not been set, points out John McArthur of the Brookings Institution in a new paper, “Seven Million Lives Saved”. During the 1990s the number of child deaths was already falling steeply, and it may be reasonable to assume that this would have continued.The paper models the counterfactual by extrapolating from the 1990s using data from all 173 countries with populations above 200,000 in 2000, of which 141 were considered “developing” rather…