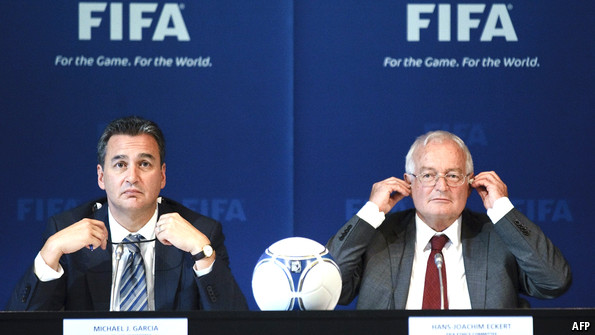 AUTOCRATIC Russia and sweltering Qatar won the rights to host the 2018 and 2022 World Cups fair and square, after a generally clean and honest bidding process. There might have been dodgy dealing, perhaps even criminal behaviour, on the part of a few of those involved—but not enough to justify rerunning the bids.That, at least, is according to FIFA, world football’s governing body. On November 13th it described the results of an internal investigation into the bidding process as having mostly cleared itself and the host countries of wrongdoing. Nevertheless, on November 18th it said that it was handing the report from that probe over to Swiss authorities because it may have uncovered criminal activity (as yet unspecified).The investigation into the bidding process had been led by Michael Garcia, an American lawyer, who submitted over 400 pages of findings to FIFA’s ethics committee in September. His report was then reviewed by Hans-Joachim Eckert, a German judge who heads the committee’s adjudicatory chamber (pictured right, with Mr Garcia). It was not published, despite pleas from some FIFA officials and Mr Garcia himself. Instead Mr Eckert released his own…