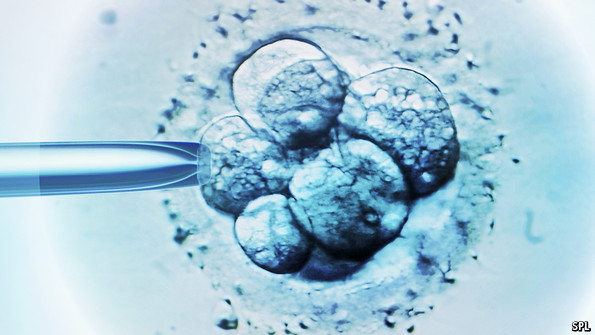 “IN FRANCE,” says Fabrice Houdart, as he dandles his baby, “we are like a circus attraction.” The Frenchman lives in Washington, DC, with his American boyfriend and their two children, who were conceived using eggs from a Californian donor and born by a surrogate in Pennsylvania. Families built with such a variety of help are still rare enough to raise eyebrows. But across the rich world “test-tube babies” no longer draw a second glance. Since the first, Louise Brown, was born in 1978, 5.5m more have followed, half of them in the past six years.Back then, doctors had to hope that the single egg they retrieved would be fertilised when mixed with sperm, and that the resulting embryo would be a winner. Success rates were just a few percent. Now, with stronger drugs to stimulate ovulation and better laboratory techniques to manipulate and store embryos, more than a quarter of IVF attempts result in a baby.For the infertile couples it helps, IVF is close to a miracle. But for many more, the cost is prohibitive. Public health programmes in some rich countries, including Australia, Japan and several European ones, cover IVF for some who need it, but rarely all. Britain’s…