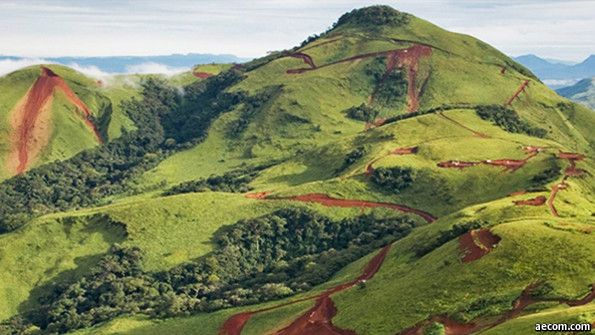 “AN emblematic tragedy” is how Sir Paul Collier, an adviser to the British government, describes the situation in Guinea—referring not to the Ebola outbreak (awful though he considers that to be) but the saga of Simandou, a mining project mired in allegations of corruption, expropriation and corporate espionage.Simandou, a mountainous area in southern Guinea (pictured), has been called the El Dorado of iron ore. It is the world’s largest known untapped deposit of the stuff, with enough ore to sustain annual production of 200m tonnes—7% of global iron-ore output—for more than a quarter of a century. Better still, the ore there has unusually high iron content. The potential project cost for the mine, and the railway and port that would be needed to get ore on to ships, is $20 billion, making it Africa’s largest ever proposed mining venture. Guinea could do with the investment: it ranks 179th out of 187 countries in the UN’s human-development index. Wags, alas, have taken to calling Simandou “Simandon’t”. Exploration rights were first granted in the 1990s, yet the earliest anyone expects production to begin is 2019.The saga oozes intrigue. Among its cast of characters: two…