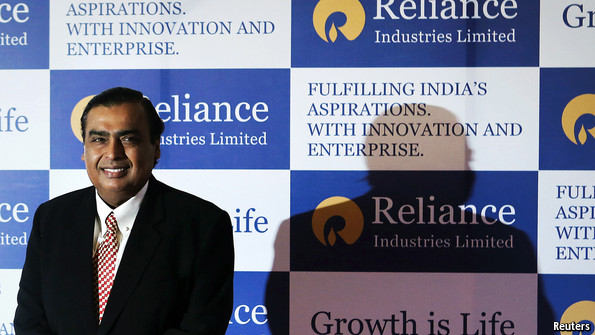 IF YOU look north from a helicopter hovering 30km (19 miles) off India’s east coast, the Bay of Bengal looks just as it must have done centuries ago. Tiny fishing boats with white sails pitch and yaw across the ocean. But look down and you will see the new India. A landing pad says “Dhirubhai” in big letters—the name of the founder of Reliance Industries. His son, Mukesh Ambani, now runs the firm (which is India’s second-most-valuable), and is India’s richest man.The helipad sits on a vast processing ship. Oil and gas rise from the seabed 1km down. The vessel siphons off the oil while the gas is piped onshore. It is one part of an $11 billion project by Reliance and BP, a British oil giant, which was hailed as the answer to India’s energy problems—and is now embroiled in controversy.When Reliance found gas in 2002 in a block called KGD6, it was the world’s biggest gas discovery that year and India’s largest since the 1970s. For the country it was wonderful news. Rather than import oil from the Middle East, blowing a hole in the balance of payments, or burn more filthy local coal, India could, it seemed, turn to a cheap and clean source of energy.The discovery also…