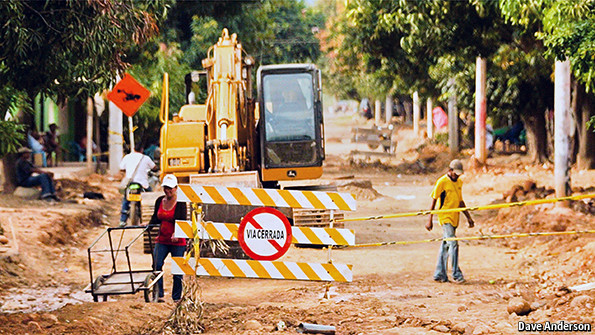 THE wooden shacks are neatly grouped in blocks; fences separate lots; there is even the odd well-tended garden. As slums go, Brisas de La Popa is surprisingly organised. But as Miguel Villazon drives through this district on the outskirts of Valledupar, a city in north-eastern Colombia (pictured), he remains unimpressed. “Upgrading this neighbourhood will take years,” grumbles Mr Villazon, the mayor’s right-hand man. Streets will have to be widened, shacks moved and sewers put in. “Doing all this before people come, would be much, much cheaper.”Like many cities in poor countries, Valledupar has grown in higgledy-piggledy fashion, from a town of 150,000 in 1985 to a city of nearly 440,000 now. Land was occupied before critical infrastructure was put in, often at great expense. But now Valledupar and eight other cities in Colombia and Ethiopia—to be joined by others in Ecuador, Mexico and India—want to show that urban growth need not be so disorderly. They are part of the Urban Expansion Initiative, an ambitious programme launched by New York University (NYU) to help cities make long-term preparations for their growth….